The Champions League finally makes its return this week, and in GW1’s fixtures, eagle-eyed kit fans amongst you may have spotted something slightly different on the sleeves of some former Champions League winners.

This season, UEFA have redesigned the sleeve patches worn by former winners. The redesigns first started to surface when various clubs unveiled their shirts for the 2021/22 season featuring the new-look patches. They are able to be worn by any team which has won either five UCL titles in tota – Real Madrid, AC Milan, Liverpool, Bayern Munich, Barcelona – or three in a row – Ajax.

Joining the new patches is also a revamped look for the winner’s of the previous season’s Europa League, who will play in the current season’s Champions league. That patch will be on the sleeves of Villareal for this campaign.

In light of these updates, we decided to look back at the patch designs used in the Champions League throughout its history, right up to these new designs. 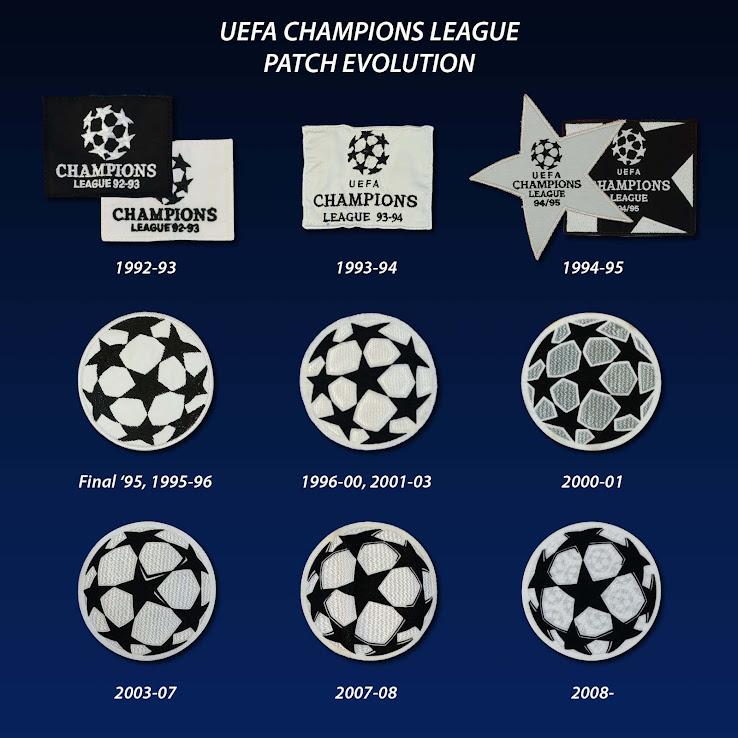 Beginning with the competition’s revamped inception from the European Cup to the Champions League in 1992-93, the first sleeve patches are a far cry from the star ball designs currently used.

A flat rectangular shape, the patch still features the famous stars of the competition, but not in the ball shape we are used to nowadays. Below that was the Champions League title and season.

This first edition also saw the use of opposing colour schemes, with a white and black version.

The following season saw these opposing colour schemes dropped in favour of just a white version. Aside from a slightly more controlled font stitching, little changed in version 2.0 of the Champions League sleeve patch.

The third season of Champions League football saw the biggest changes yet, as the iconic sta design took centre stage. But rather than the eight stars in a ball shape we have become used to, this design was a star-shaped patch, featuring the ball logo and season stitched in the middle. The alternating colour schemes also made a return, with black and white stars used depending on the shirt’s colour.

In the 1995 Champions League final, in which Louis Van Gaal’s Ajax beat Fabio Capello’s AC Milan, we got our first glimpse of the star ball patch design we know so well today. After its final appearance, the patch has been seen on the shirt sleeves of every Champions League team in every season since.

In that time it has gone through several subtle redesigns, with shading added to the stars and a greyer background used, but in essence, this design has remained the same eight star, ball-shaped design for the last 26 years.

First introduced during the 2001-02 campaign, these patches were to signify the greatness of past winners – those with five or more trophies, or teams which won three titles in a row. At the time, only Real Madrid, AC Milan, Ajax and Bayern Munich had earned that right, but in the years since, Liverpool and Barcelona have found their way onto that list.

For the new Champions League season, though, it seems that UEFA wanted to go for a new look to honour those previous winners. This new design essentially combines the patch worn by all teams in the competition with the previous winners patch we have been used to. The starball design is kept, and the number of titles won is placed in the middle.

The new design is much more striking than its predecessor, and may be a more welcome addition to replica kits for fans. Another change to the usual sleeve patches this season sees the UEFA Respect patch replaced with the UEFA Foundation patch.

While they might seem like a needless extra, a Champions League sleeve patch can be a great addition to any shirt. Some collectors even try to build collections built solely around these types of shirts. Others can order the patches online and iron them on themselves. We even have a few Champions League patches shirts available on our marketplace right now, in the shape of these Bayern Munich 2001-02 jerseys!